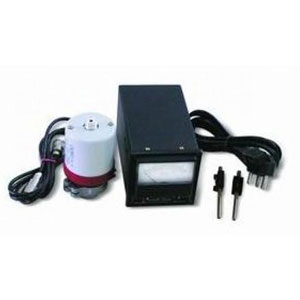 Penning gauge is a cold cathode Ionisation gauge consisting of two electrodes anode and cathode in side sensor. A potential difference of about 2.2 KV is applied between anode and cathode through current limiting resistors. A magnetic field is introduced at right angles to the plane of the electrodes by a permanent magnet which will increase the ionisation current. The electrons emitted from the cathode (gauge head body) of the gauge head are deflected by means of magnetic field applied at right angles to the plane of the electrodes and are made to take helical path before reaching the anode loop. Thus following very long path, the chance of collision with gas molecule is high even at low pressures. The secondary electrons produced by ionisation themselves perform similar oscillations and the rate of ionisation increases rapidly. Eventually, the electrons are captured by the anode and equilibrium is reached when the number of electrons produced per second by ionisation is the sum of positive ion current to the cathode and the electron current to the anode and is used to measure the pressure of the gas. This instrument with the sensor having wider range of applications, in high vacuum systems where the final Vacuum to be measured in process chamber.

These instruments can be used in high vacuum systems, coating units, sputtering units, vacuum furnaces and many other applications where high vacuum to be measured in the range of 10-2 to 10-6 m.bar.